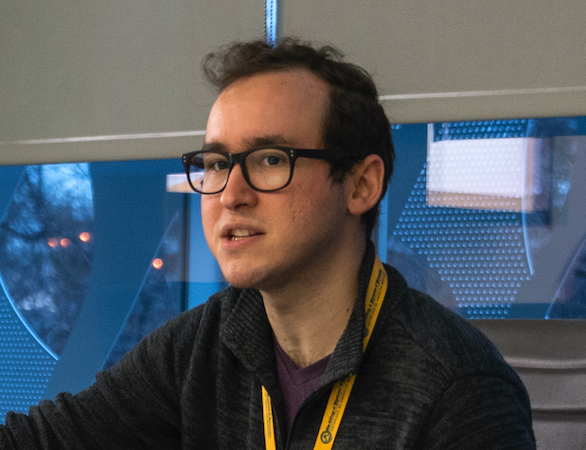 Contact:
vgomes@upenn.edu
vgomes@collegeofphysicians.org
@notnaughtknot am a PhD student in the Psychology Department at the University of Pennsylvania where I'm advised by John Trueswell and am a member of his lab. Outside of Penn, I work for the College of Physicians at the Mütter Museum as the program coordinator for out4STEM, an afterschool program for queer teens interested in science.

Like most psycholinguists, I am interested in the relationship between language and thought. I approach this by studying how children learn logical terms. I currently focus on how children learn truth-functional negation by investigating what cues are available to them as they grow. I also work on words that convey a symmetrical entailment relationship between their constituents (if X is Y's cousin, then Y is X's cousin too, necessarily).

Prior to Penn, I double majored in Psychology and Cognitive Science at Swarthmore College, where I worked with Allen Schneider and Daniel Grodner.

Not what you expect: The relationship between violation of expectation and negation. Presented at 42nd CogSci Conference (2020)

Not as hard as it looks? Linguistic, and not conceptual, ability drives negation acquisition. Presented at BUCLD 46 (2021)

Knowlton, T., & Gomes, V. (2022). Linguistic and non-linguistic cues to acquiring the strong distributivity of each. Proceedings of the Linguistic Society of America, 7(1), 5236.

How do we learn what not means? It's difficult to point to in the world, yet children say it all the time. Lois Bloom suggested that there's actually a few kinds of negation: prohibition ("No running!"), nonexistence ("No more water"), and denial ("That's not a dog") among others. Past and current research found that children produce and comprehend denial later than other kinds of negationThough, the comprehension side is still debated, see work by Feiman and de Carvalho, A., Gomes, V., Chen, Y., & Trueswell, J. (in prep).. This apparent delay may be because they lack the conceptual machinery to represent it. Or, it may be beause denial contains fewer perceptual cues, and as a result requires integrating perceptual and linguistic information. In other words, I am interested in whether negation as a concept must be acquired. If so, then how is it learned and what changes throughout development? If not, then how do we map it onto language and why is there a delay? I'm also interested in how negation is processed in real-time, how it affects word-learning, and how it relates to inhibitory control.

Many relations and the way they're expressed in language are assymetrical. "João saw Maria," does not necessarily entail that "Maria saw João." But, there are some words that behave differently. For example, if I'm equal to you, then it's necessarily true that you're equal to me. We call these words which strongly entail the inverse ordering "symmetricals."

Symmetricals can be nouns (e.g., cousin, brother), prepositions (e.g., near, by), and adjectives (e.g., similar, equal). Unlike other words, they seem to always require multiple participants (e.g., "João kicks," but "*João meets."). I'm interested in how we learn which words are symmetrical, and what this says about the structure of language.

I believe scientists have responsiblities out of the lab that are just as important as those in the lab.If not more. If you're a researcher who is interested in doing more outreach, please feel free to get in touch. If you're a teacher, educator, or student, please feel welcome to reach out to ask about visiting the lab, or having us visit.

For the past two years, I've been a graduate student member of mindCORE's education comittee. It is currently in the process of extending mindCORE's efforts to increase research engagement by students from various underrepresented groups. If you have any questions or any suggestions you'd like me to present or advocate for there, please don't hesitate to reach out.

•For R and stats, I heavily reccomend "Learning Statistics with R" by Danielle Navarro.

•For python, I reccomend "Think Python" or "Learn Python the Hard Way" depending on your style. I also suggest using jupyter labs.

•For running experiments online, I suggest PennController for IBEX. I've run experiments with IBEX, psiturk, and self-hosting, and PennController has been the most beginner-friendly. I've yet to try _magpie (minimal architecture for the generation of portable interactive experiments), but will update with my experience if/when I do.

•For LaTeX, this tool lets you draw a symbol and gives you the LaTeX code for it.

Zador, A. M. (2019). A critique of pure learning and what artificial neural networks can learn from animal brains. Nature communications, 10(1), 1-7.